The notion of benchmarking organizations against others has become a mainstay in healthcare, especially among hospitals and health systems. As an industry, we have become accustomed to leveraging quality scores and external rankings relative to any number of methodologies from U.S. News & World Report and The Leapfrog Group to CMS’ Star Ratings and Hospital Compare, to name a few.

In working with health systems across the country, I have been struck by the tendency for executives to routinely compare themselves to “peer systems”. In this case, peers were often defined by a dimension of system size or brand recognition (by national rankings). While there is tremendous value in learning from others, benchmarking for the purposes of decision-making related to future supply and demand, and subsequently consumer yield, requires a more data-driven approach.

As we know from previous research, the impact of intra-market variation alone is significant. With most large health systems operating in more than one market, often in disparate geographic areas, distinguishing between inter-market similarity and dissimilarity is a crucial element in benchmarking across markets.

Comparing population size, demographics, and psychographics, these paired markets look quite similar, despite being geographically different (Figure 1). For example, Idaho Falls, ID and Bowling Green, KY have nearly identical population sizes, ratios of White to Non-White individuals, and average household income. Willful Endurers, individuals who live in the “here and now,” account for the primary consumer profile in all six markets that we analyzed. Yet, demand for healthcare services will be dissimilar given no two markets are exactly alike, regardless of how much they may appear to align. 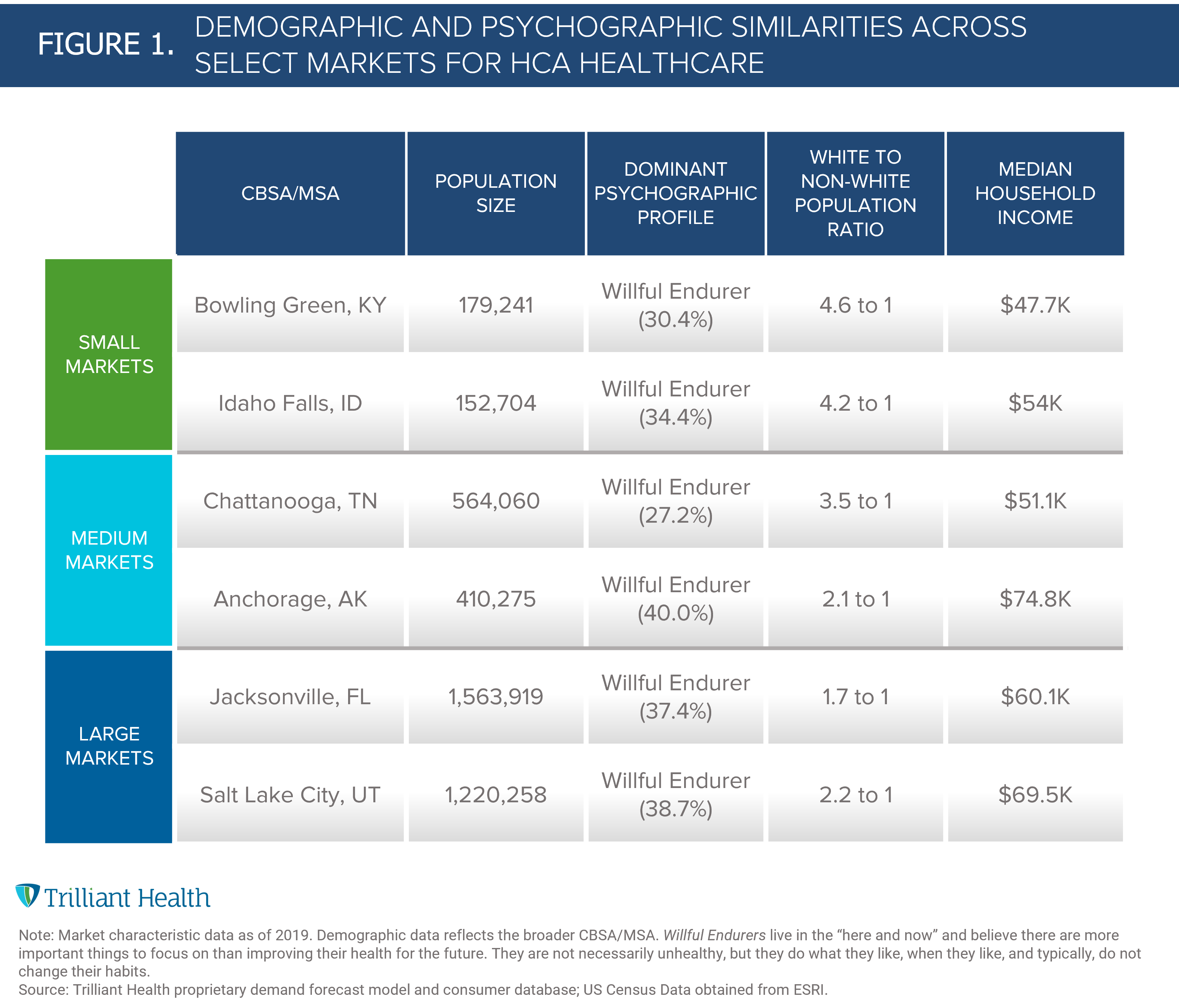 Our previous research has concluded that the forecasted median year-over-year growth rate of major surgical service lines is not expected to exceed 2%. Our analysis of certain surgical service lines across these six markets reinforces this national trend in most scenarios, but also reflects a dissimilarity in demand growth across similar markets (Figure 2). For example, growth in demand for Heart/Vascular surgical services is projected to decrease in Jacksonville, FL but slightly increase in Salt Lake City, UT. Despite growth in demand decreasing nationally, the inter-market differences in each market’s projected future demand is unique to the patient population.

Thanks to Katie Patton and Stephen Tilstra for their research support.